Chris Brook and I have just published an article in Forensic Science International: Synergy presenting the results of a survey of parents and caretakers who claim to have been wrongly accused of child abuse after a medical determination of shaken baby syndrome/abusive head trauma (SBS/AHT). 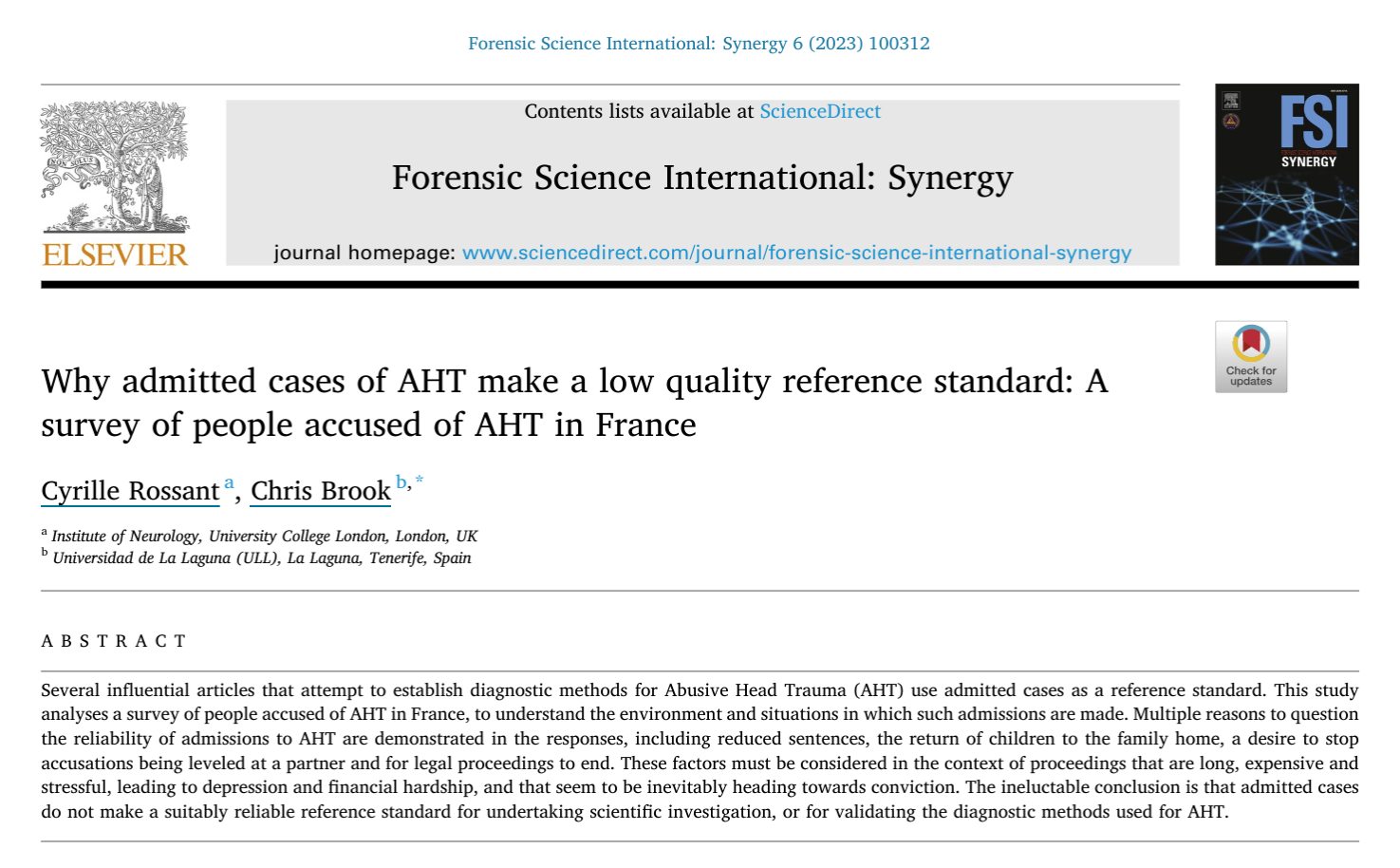 Here is the abstract of this paper titled "Why admitted cases of AHT make a low quality reference standard: A survey of people accused of AHT in France":

Several influential articles that attempt to establish diagnostic methods for Abusive Head Trauma (AHT) use admitted cases as a reference standard. This study analyses a survey of people accused of AHT in France, to understand the environment and situations in which such admissions are made. Multiple reasons to question the reliability of admissions to AHT are demonstrated in the responses, including reduced sentences, the return of children to the family home, a desire to stop accusations being leveled at a partner and for legal proceedings to end. These factors must be considered in the context of proceedings that are long, expensive and stressful, leading to depression and financial hardship, and that seem to be inevitably heading towards conviction. The ineluctable conclusion is that admitted cases do not make a suitably reliable reference standard for undertaking scientific investigation, or for validating the diagnostic methods used for AHT.

When a medical determination of SBS is made on a child admitted at the hospital, parents or caretakers are taken into custody. It may happen that the medical findings of the child were not caused by abuse, but by medical conditions or accidental household falls. Unfortunately, doctors are frequently convinced that abuse actually occured, and they may disregard any alternative explanation given by the parents or caretakers.

These doctors tell the police they're certain abuse is the cause of the child's medical findings. Even before starting their interrogation, police officers know, from their confidence in the medical experts, that the persons they're interrogating are guilty. From there on, any denial of guilt is considered as a lie. Of course, many perpetrators will deny any wrongdoing. That does not prove, however, that all denials are false.

Interviewees in this context are highly stressed, their child is either at the hospital, or in foster care, or deceased. Their narrative of what happened with their child (i.e. the child suddenly collapsed, or fell from low height), is systematically disregarded as impossible. In this situation, some innocent parents or caretakers may be led to falsely confess to abuse.

To our knowledge, this article is the first to collect data on reports of police interviews by parents and caretakers in SBS/AHT cases. Key findings are shown in the following figure, taken from the article: 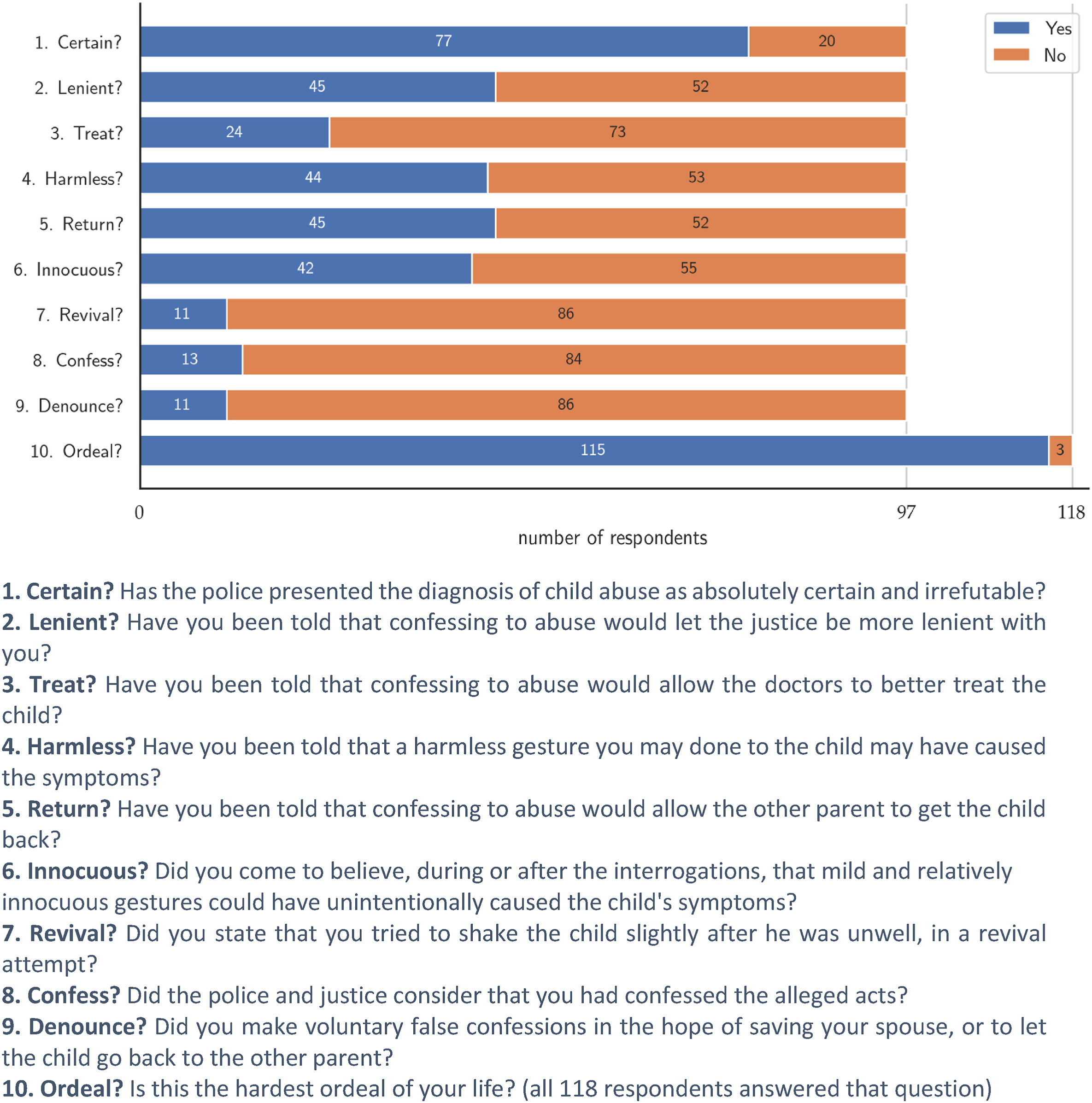 Although the data analysed in this article is declarative in nature, it shows that the scientific reliability of confessions is too low to be used as a reference standard. The existence and nature of confessions of SBS/AHT, always obtained after a medical determination of SBS/AHT was made, do not allow to link a specific injury mechanism to specific medical findings, even if some of these confessions are genuine. A more robust standard would be to consider admissions of abuse obtained before a medical determination of abuse is made. One such study showed that the medical findings typically associated with SBS/AHT are almost never found in these cases.

As the article concludes:

The results of a survey of French parents who have been accused of AHT highlight a range of concerns with using admitted AHT as a reference standard for validating the methods used to diagnose AHT. As well as plea bargains, there are multiple other reasons to question the reliability of admissions to AHT, including the promise of (or hope of) reduced sentences; the promise of (or desire for) the return children to the family home (to at least one parent); a desire to stop accusations being leveled at a partner; a desire for legal proceedings to end, and certainty to return. These factors must be considered in the context of expensive and stressful legal proceedings that are drawn out over years, leading to depression and financial hardship, and that seem to be inevitably heading towards conviction, given the qualifications and influence of the medical experts who will testify for the well-funded state.